The day was one which you can really only dream about. Not only were years of meticulous planning and organising brought to a successful conclusion but the weather also played its part and in a cloudless sky the wind remained hidden and the sun shone as if we were in the Sahara.

The Auster faithful gathered on Saturday 20th April at the Rearsby Business Park to remember and commemorate what happened there. 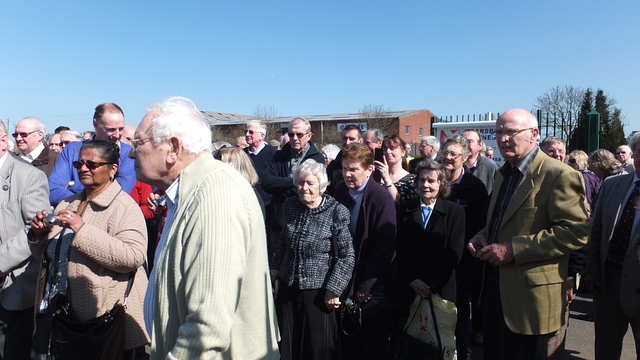 The site was host, prior, during and post the Second World War to the development and production of Leicestershire’s most prominent aeroplane The Auster.

The event was inspired by the owner of the Rearsby Business Park Mr Ivor Vaughan CBE who planted the idea of a commemorative plaque some eight years ago. The idea lay dormant until the start of 2011 when it was taken up by Chairman of the International Auster Club Heritage Group (IACHG), Mr Gordon Hallam who spent the following two years preparing for just this day.

A good-natured crowd of over a hundred, including ex-Auster employees, International Auster group members, members of the Leicester Museum Services, members of the IACHG and local media were welcomed to the event by Mr Hallam under a cloudless sky. 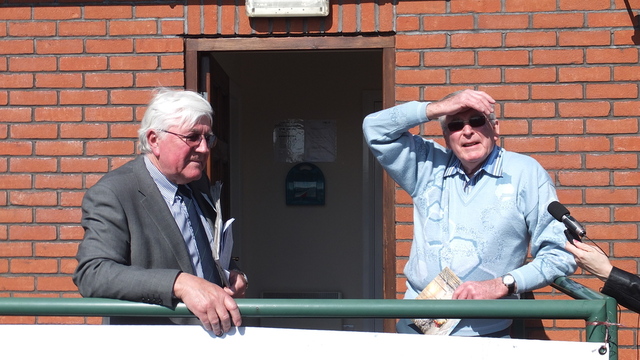 He introduced the event’s patron Mr Ivor Vaughan who talked with some passion about the Auster and the reason he was so inspired to mark both the aircraft’s role and the role of the many hundreds of people who worked to develop this remarkable machine.

He said “we are gathered here today so as not to forget the hard work, innovation and engineering expertise of the people who worked here, and to permanently commemorate and record what happened here because The Auster was one of Leicestershire’s best”.

He also spoke of the remarkable Mr AL Wykes the founder of the Company whose vision led to the production and ultimate success of the Auster aircraft.

He then paid tribute to probably the very first ‘Apprentice’, Austers own Mr Gordon Hallam, a lifelong admirer of the aircraft who in Ivor’s own words “smote aside all obstacles” and ensured that the day actually happened and also that it went exactly to plan.

The crowd, some clad in Auster apparel were then marshalled by members of the Air Training Corps to the front of the business park ready for the unveiling of the plaque.

Under a sky blue cloth and RAF colours, the plaque was revealed by Mr Ivor Vaughan to gentle but quite emotional applause from the Auster enthusiasts. 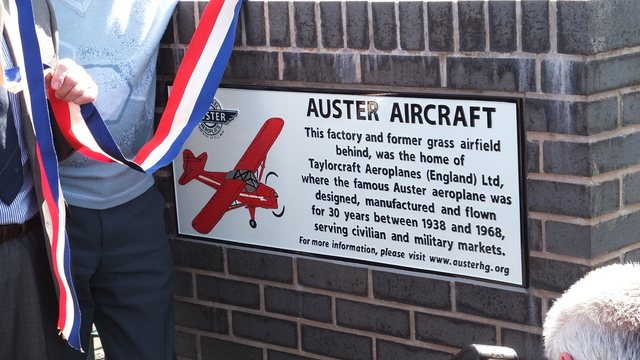 Then exactly on time the faint, low hum of Gypsy Major engines were heard getting closer and closer. Every camera in the crowd swung skyward and two Auster aircraft came into view. They didn’t roar like jet engines nor did they leave vapour trails, but elegantly moved across the brilliant blue sky over the crowd before turning gracefully for a final flypast. Despite the Austers role during the war their appearance seemed to suggest a link back to gentler times. The crowd were quiet and respectful as the Austers flew past the second time, held in place by their own individual memories of their time with the aircraft. It was very possibly the last time some of the crowd would ever see the Auster fly.

It felt rather emotional as the Austers disappeared over the horizon and people started the short trip to Queniborough Village Hall for refreshments courtesy of Mrs Beryl Preston and her team.

Tables had been prepared for over a hundred and they were packed as people enjoyed their well earned coffee, tea, biscuits and cakes. ‘Auster’ was in the air as people reminisced and shared their memories of their time with the aircraft. With the cakes and tea and chatter the atmosphere in the hall was reminiscent of the days when the Auster was at its peak, people seemed to have more time for each other and high teas and tea dances were the order of the day.

With the IACHG’s role now coming to a conclusion they took the opportunity to share their remaining books, pictures, prints and memorabilia with the Auster enthusiasts. Six lucky ticket holders walked away with wonderful pictures of the Auster aircraft, the ATC were presented with three prints in thanks of their hard work on the day.

To conclude, as a thanks for his inspiration and patronage, Mr Hallam presented Mr Ivor Vaughan with three leather-bound volumes of Auster information recording the histories of the Auster aircraft and its people.

As people melted happily away from the hall with their Auster memories refreshed, thus ended a wonderful couple of hours which for some reason seemed pleasantly to last all day.

Reporters from the Melton Times recorded the event and the resulting mp3 file (11.5M) can be downoladed here.

Some local press reports can be viewed here

More pictures of the event can be seen in our picture gallery.